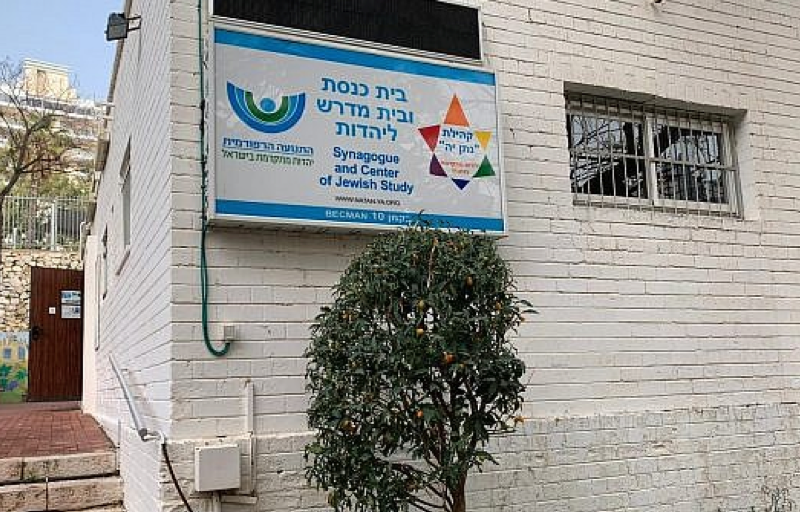 It is with great sadness that I report to you that the only Reform synagogue in our partner city of Netanya, in Israel, was vandalized on International Holocaust Remembrance Day, January 27, 2019. The Natan Ya congregation members arrived that morning to find their sanctuary flooded with roughly 2,500 liters—over half a foot—of water, said the temple’s Rabbi, Dr. Edgar Nof.

Sometime the previous night, the vandals had broken through a locked protective fence, destroyed the congregation’s garden, jimmied open the barred window leading into the sanctuary, brought a garden hose into the window and turned it on full blast.

The damage is extensive. The tile floor, furniture, and prayer books, including books of the Talmud, the siddurim, were ruined from the flood. “Cleaning work has begun. Damage was already found to prayer books, bibles, Rabbi Nof’s guitar, amplifier system, carpet, and so on. Luckily no damage to Torah scrolls or the Aron HaKodesh,” reported synagogue member Reuven Marko, who is also chair of the Israel Movement for Reform and Progressive Judaism.

The Jewish community of Cincinnati has a history of close relations with not only the people of Netanya, but also Congregation Natan Ya. Rabbi Nof, who has visited Cincinnati several times and has spoken at Wise Temple, is a pioneer in bringing Reform Judaism to Israel. The volunteers who serve on our Federation’s Board and committees have made it a priority to partner with Israelis to support pluralism—i.e. that different ways of practicing Judaism are available and respected. For example, our Israel & Overseas Planning & Allocations committee has voted to provide some funding to Congregation Natan Ya for the past two years. These dollars come from your contributions to the annual campaign.

Rabbi Nof has reached out to the Federation and asked for our help with rebuilding. The Federation has allocated $1,000. If you or anyone you know would like to help, please contact Marci Blachman, Director of Agency Fundraising & Special Gifts, at 513-985-1519 or mblachman@jfedcin.org.

As of now, 10 days later, the police investigation is ongoing but the perpetrators are still unknown.

Rabbi Nof said that for the past two to three years, the congregation has been targeted roughly every other month. He attributed the increase in attacks to the synagogue’s success in attracting new members. In the past five years they went from one to two bar mitzvahs a year to, in 2018, celebrating 72. Although Natan Ya is celebrating its 50th anniversary, there remains surprising amounts of misunderstanding and disrespect for non-Orthodox Judaism in some segments of Israeli society.

Two months ago, says Rabbi Nof, “a group of teenagers screamed ‘stinky Reformist,’ [and] a few months ago on three consecutive Friday mornings we found dead rats in the stairway to the synagogue.”

In a written statement, Rabbi Nof declared, “Anyone who thinks that it is possible to extinguish the tune of this special and dedicated Reform community that I am proud to be among is wrong. Hate and contempt are not our ways.”

"Hate and contempt are not our ways.” —Rabbi Edgar Nof