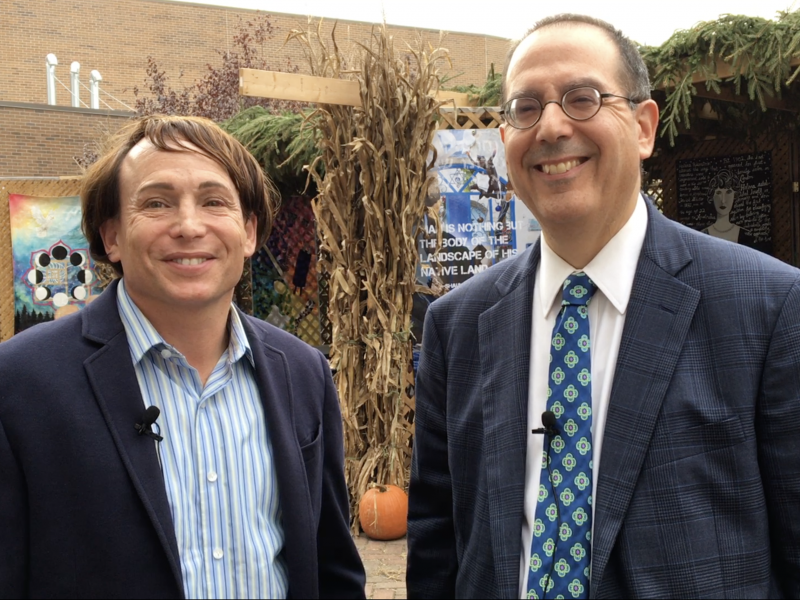 David Schizer, CEO of  American Jewish Joint Distribution Committee (JDC) visited Cincinnati this Erev Sukkot and gave community leaders an update on the all work JDC does, which we help to fund. Since 1914, JDC has been saving Jewish lives and building Jewish life throughout the world. I asked him what specifically JDC is doing now to help Jews in troubled situations.

I appreciate that you said really all of the work that JDC does can fit into the two categories of saving Jewish lives and building Jewish life. Could give us one concrete example of each of those?

Absolutely, and first, I should say it is such a pleasure to have Cincinnati as our partner. The things we do together are so incredibly impactful. Saving Jewish lives is about helping the neediest Jews in the world. Perhaps the best example of this are elderly Jews in the former Soviet Union. Although they were incredibly successful and they are so much like us in so many ways, they are retired doctors and they are retired engineers, but they are living on pensions of as little as two dollars a day. It’s unimaginable. Without the support that we provide together, they quite literally would not be alive.

In addition to that work, we’re also able to build Jewish life. Even in the former Soviet Union – and this is a place where the sparks of Jewish life were nearly extinguished by relentless oppression from the Communist regime. Today there is a real awakening of Jewish life. We’ve got Jewish kids coming to a summer camp that we run in Budapest called Szarvas, where they rediscover what it means to be Jewish.

One of the areas that JDC was involved in during World War II, and is unfortunately getting back involved in, is providing security and security training in Europe. Is that right?

Yes, and it’s a bit of a “back to the future” concept because, the truth is, JDC was very involved in organizing and funding the Warsaw Ghetto Uprising. G-d-willing we’ll never see anything like that again. What we do see is that there is a significant threat to Jewish communities, and to Jews in Western Europe in particular, and so we’ve been very involved in bringing experts to Jewish communal organizations to do audits, which will identify enhancements that they need to make their buildings safer. Then, in addition, another key area for us is to help individual Jews identify threats, to notice when there’s something that doesn’t look quite right, and to know what to do in response to a potential threat.

Another area of work that JDC does and is famous for is helping Jews in politically troubled areas. Can you let us know a country where JDC is at work?

Absolutely. Venezuela is a very difficult place right now. The economy is in free fall, and the government, at least parts of the government, are very hostile to Israel and not always especially friendly to the Jewish community, either. So our responsibility is to work with that community that we’ve had a long and deep relationship with, and to give them the support that they need.

Thank you so much. We’re really fortunate to have the JDC CEO with us today, and we’re very glad that our Annual Campaign helps to support the life-saving work that JDC does all around the world.

"Venezuela is a very difficult place right now, the economy is in free fall and the government, at least parts of the government are very hostile to Israel and not always especially friendly to the Jewish community either. And so our responsibility is to work with that community that we've had a long and deep relationship with, and to give them the support that they need." - JDC CEO, David Schizer, on helping Jews in politically troubled areas