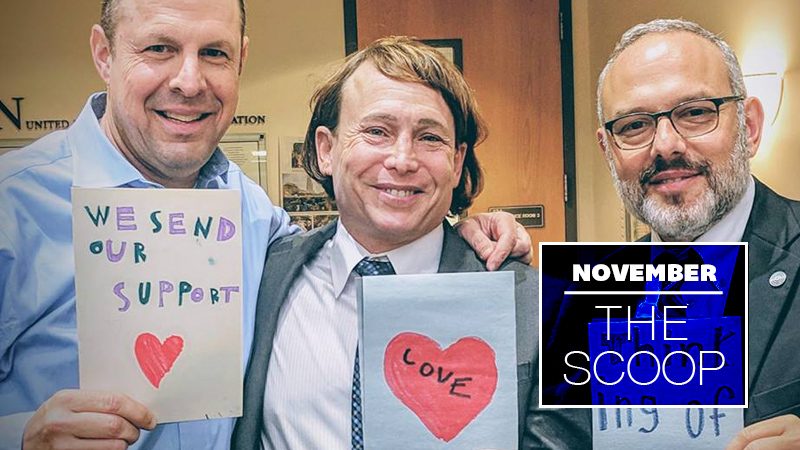 ‘We Will Get Through This’: The Scoop in November

I spent the end of last week, including last Shabbat, in Pittsburgh, grieving with many who knew people killed at the Tree of Life Synagogue. I have learned that when bad things happen, often the best thing I can do is to show up. I lived in the Squirrel Hill neighborhood where the attack happened. So I needed to be there, when the neighborhood mourned.

On Friday, I attended the eleventh funeral, which was for Rose Mallinger—the feisty, 97-years-young, trunk of the Tree of Life. Thousands of people lined up to get in—Jews, people of all faiths, public officials, and civic leaders.

Everyone was moved by Rev. Eric S.C. Manning, pastor of the Emmanuel African Methodist Episcopal Church in Charleston, South Carolina, where nine people were brutally murdered by a white supremacist gunman in 2015. He said, “Charleston stands with you. My church is your synagogue. Your synagogue is my church.”

I saw members of the Muslim, Sikh, Christian, and African American communities streaming into the synagogue. And it occurred to me that many of us in the Jewish community were worried and wondered if it was safe to go to synagogue. But here were people who didn’t need to be there taking some added measure of risk to stand with us.

Someone posted on my Facebook page, “It’s not 1939.” What she meant was that in 1939 Germany, the Jews were rounded up not just because there were murderous, violent antisemites—it was that no one came to help. No one stood with us. No one took a risk to protect us. And we saw the opposite this Shabbat. We saw people coming out of the woodwork to support us.

I was honored to deliver support from the Cincinnati Jewish community to my former colleagues at the Jewish Federation of Greater Pittsburgh. I brought more than $50,000 in donations and about 100 cards of condolence and support from our community. The Federation staff looked exhausted but unified and determined. They had attended all eleven funerals, visited with the families, managed constant communications, and tracked thousands of donations. They had no time for their own grief because they had to lead the city through this tragedy and make countless decisions to address the community’s most pressing needs. I told them they were heroes.

Coincidentally, the Tree of Life Congregation was hosted for Saturday Shabbat services at the congregation my family had belonged to. So, I saw so many people I hadn’t seen in years. I could see that it meant a lot to them that I had shown up. Frequently, we couldn’t speak. We just hugged—for much longer than usual.

I was there five days after the shootings. But so many were still literally shaking. They needed to hear someone say to them, “We will get through this.” No one knew for sure that was true, but by hearing another person say it, they began to believe it.

"They needed to hear someone say to them, “We will get through this.” No one knew for sure that was true, but by hearing another person say it, they began to believe it." —Shep Englander