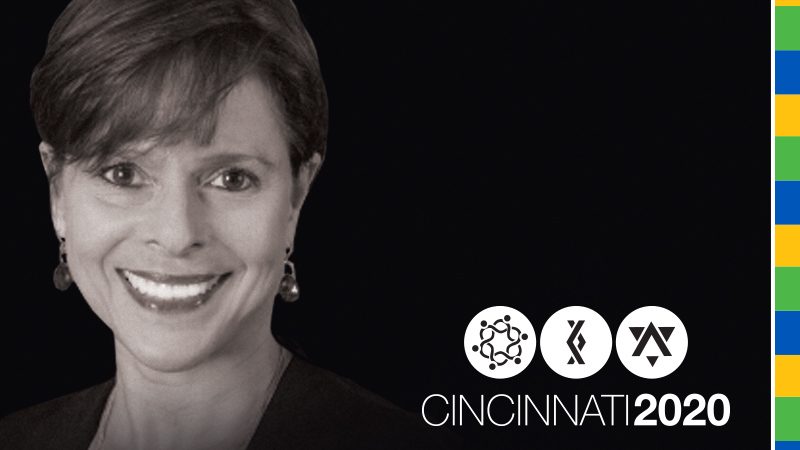 Each installment in this series features a different perspective on Cincinnati 2020, the Jewish community’s visionary plan for building an exceptional future. This week, we hear from Kim Heiman, Chair of JFNA’s iRep initiative.

What is your current title, both in regards to the Jewish Federation of Cincinnati, and how your work supports Cincinnati 2020?

I am the Chair of the Jewish Federations of North America’s (JFNA) Israel Religious Expression Platform (iRep) initiative. This is a relatively new effort to promote the legitimacy of diverse religious expression in Israel. Our first focus has been on promoting freedom of marriage choice. At present, the only option for a legal Jewish marriage in Israel is through a ceremony conducted under the auspices of the Chief Rabbinate. Weddings conducted in Israel by many Orthodox and all Conservative, Reform, Reconstructionist, and Humanistic rabbis are not recognized by the State. It is estimated that, for what many see as the most significant lifecycle event in Jewish life, 20 to 30 percent of Israelis get married outside of Israel due to the various hurdles and restrictions imposed by the Chief Rabbinate (Rabbanut).

Given that one of the key goals of Cincinnati 2020 is to strengthen our local community’s connections with Israel, and given that this goal falls within the Connecting pillar of our community’s strategic plans, it is critical to the American Jewish community that Israel both understands and demonstrates respect for our religious diversity.

How did you first get involved in or hear about Cincinnati 2020? What is your role now?

For the last two years, I have been serving as the national chair of iRep. The iRep initiative was an outgrowth of JFNA’s Global Planning Table. Federation CEO Shep Englander and I represented Cincinnati on the Planning Table for the two years prior to iRep’s formation, and together we advanced this platform, which was eventually endorsed by the national JFNA board.

Already, we have seen real, measurable results. iRep’s work has strengthened the trend in Israeli society to support alternative marriage options. From 2015 to 2017, the percentage of Jewish citizens who prefer marriage options outside the Rabbinate for themselves or their family members rose from 37 percent to 55 percent. In addition, support has grown within the religious-Zionist population. In less than a year—August 2016 to February 2017—a poll showed that the percentage of religious-Zionist citizens who support some form of civil marriage rose from 25 percent to 49 percent.

What does Cincinnati 2020 mean to you, given your effort to promote religious pluralism in Israel?

Cincinnati 2020 is about a brighter future—a future in which community and the bond of Jewish peoplehood are key. This sense of peoplehood is dependent on our connection to Israel, and our goal is to ensure that diverse Jewish expression is not only welcomed but also valued in Israel.

While our most recent efforts have been focused on freedom of choice in marriage, we also are looking at ways to advance the issues of conversion and freedom of worship. We are nurturing a grassroots movement by working with the Israeli public to bring about a more inclusive Jewish state.

What does the future of religious pluralism look like in Israel?

Currently we are in a very challenging period where the government of Israel has taken steps to undermine pluralism by freezing the Kotel [the egalitarian prayer section of the Western Wall] agreement and legislating a conversion bill which gives more authority to the ultra-Orthodox Rabbinate. Clearly, we have a lot of work ahead of us, and as is the case with all successful paradigm shifts, any legislative change will take persistence, patience, and time.

What steps will you take in the coming year to further promote pluralism in Israel?

With support from 18 Federations, including Cincinnati, we have invested in both a radio and a billboard campaign to promote public awareness and empower Israelis to seek out opportunities to practice Judaism as they see fit. In addition, we have allocated grants to several Israeli Orthodox organizations who are concerned that the status quo serves to distance Israelis from Judaism. They are conducting seminars and working within their constituencies to advance an openness to alternative marriage options. We are also working with the Russian Israeli community, approximately 250,000 of whom are being denied marriage rights by the Rabbinate. And finally, we have convened an advisory board of Israeli thought leaders to promote our agenda and provide valuable insight and advice.

Going forward, we plan to use the iRep process to address other issues relating to religious diversity, and it is our hope that all 157 Federations will invest in this cause.

Do you have an interesting anecdote you could share about your experience with Cincinnati 2020 as it relates to religious pluralism?

The last three weddings I attended in Israel have all been illegal—conducted outside the Rabbinate—for three different reasons.

The first was the wedding of two Israelis who wished to be married by the rabbi of the Reform synagogue in which they were raised.

The second was a wedding in which the groom’s mother (married to an Israeli), unsuccessfully tried to convert with the Rabbinate three times over 35 years. Her son, who was born in Israel, raised as a Jew, and served in the army, was unable to legally marry in Israel.

The third was a wedding in which the bride was converted by a prominent Israeli Orthodox rabbi. While the Israeli Supreme Court deemed the rabbi’s conversions legal, the Rabbinate still denied him the right to marry the couple in Israel.

What do you hope the local community accomplishes in the next five years, in terms of religious pluralism, and otherwise?

Just as the Jewish Federation of Cincinnati led the way to invest in iRep and other grassroots programs impacting pluralism in Israel, I would like to see American Jews get more motivated and inspired to effect the change they would like to see in Israel. I think this can best be achieved by getting even more involved actively supporting those initiatives working on the ground to achieve religious pluralism. This can include becoming more knowledgeable about the current situation, exposing more Israelis to American Jewish life through such programs as our partnership with Netanya and the Cincinnati Children’s Hospital Exchange, engaging with Israeli friends and family on the subject, and certainly by lobbying and writing letters to local Israeli officials and members of Israel’s Knesset.

“Cincinnati 2020 is about a brighter future—a future in which community and the bond of Jewish peoplehood are key. This sense of peoplehood is dependent on our connection to Israel, and our goal is to ensure that diverse Jewish expression is not only welcomed but also valued in Israel.” —Kim Heiman