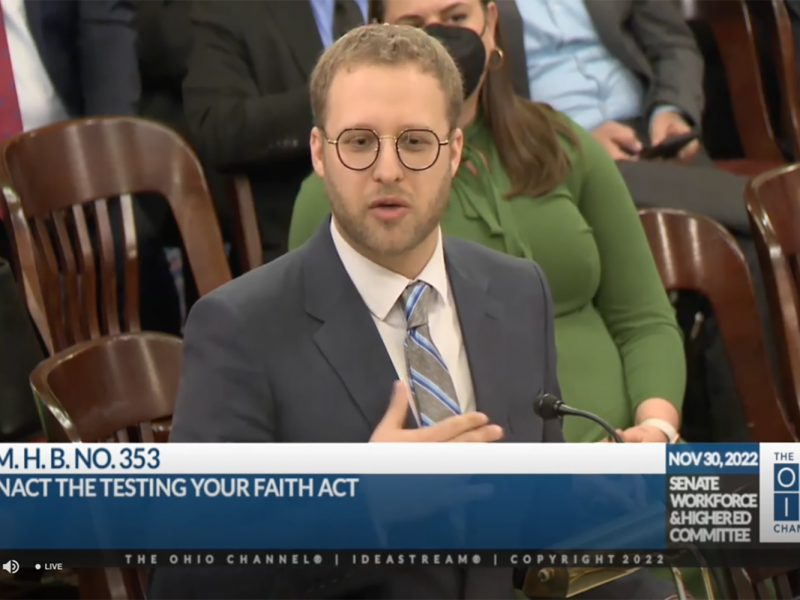 Why the ‘Testing Your Faith Act’ Matters to Jewish College Students

On Wednesday, November 30, 2022 I testified in favor of House Bill 353, the Testing Your Faith Act, being considered by the Ohio legislature. You can read the prepared testimony below, outlining why this bill is needed, and watch my testimony here.

All people shoulder some burden throughout life. However, members of minority religious groups face a particular challenge when striving to engage in the public square, to fully enjoy participation at the figurative table. That is because the rhythm of our year is set, in many respects, by the calendar and holidays of Christianity. Every public school in Ohio will be closed on Christmas; few to none will close for lunar new year, or Navaratri, or Eid, or Yom Kippur. That’s a matter of culture, and demographics, and history–and I don’t take issue with it, but I do recognize its consequences.

When working at synagogues, I have countless times heard congregants say that they wish they could participate in Jewish religious life or holidays, except that they have this or that school event that will–unfortunately–need to take precedence over religious participation.

“Do I go to chemistry, or do I go to Yom Kippur services?” “What if my professor doesn’t believe that this is a ‘serious’ holiday?” “What if there’s a test on Rosh Hashanah, and my professor doesn’t think it’s fair to let me make it up on a different day than the rest of the class?” These are all real examples of types of scenarios Jewish students face at every level of our educational system, including at state institutions of higher education within Ohio. HB 353–the Testing Your Faith Act, which I urge you to support–will make such religious dilemmas less common and lower the particular burden that people in religious minorities face in our state higher educational system.

I would like to particularly commend the approach HB 353 takes to solving this problem in two ways.

First, it removes the government from the unenviable and problematic position of needing to draw lines about which religions “make the cut,” so to speak, when it comes to receiving religious exemptions. Instead, it allows any student with a “sincerely held religious beliefs or practice” to opt into a religion-neutral framework that accommodates those of a variety of backgrounds: Jewish, Muslim, Sikh, Hindu, Christian, should their practice differ from those typically built into academic calendars.

Second, HB 353 wisely imposes no test on a student’s religious beliefs, admonishing that instructors “shall accept without question the [religious] sincerity” claimed by any student seeking accommodation. Too often, college students are forced into a no-win situation, in which they must either take on a professor who doubts or is indifferent to their religious needs or, instead, go with the flow for the sake of their educational goals, at the expense of their religion. This provision averts that all-too-common pitfall. Now, many students at our institutions do pick their religion in these cases–a praiseworthy act, one which tests their faith, in the apt words of the bill–but they shouldn’t need to be tested like this. There is no need for this binary!

In short, the Testing Your Faith Act serves as a central protection for religious students, alleviating from them an undue burden of being forced to choose between their faith and their learning.  I would ask for your help in ensuring that the next generations of college-educated leaders coming out of our state can choose to have the best of both worlds. That is what HB 353 will help to accomplish.