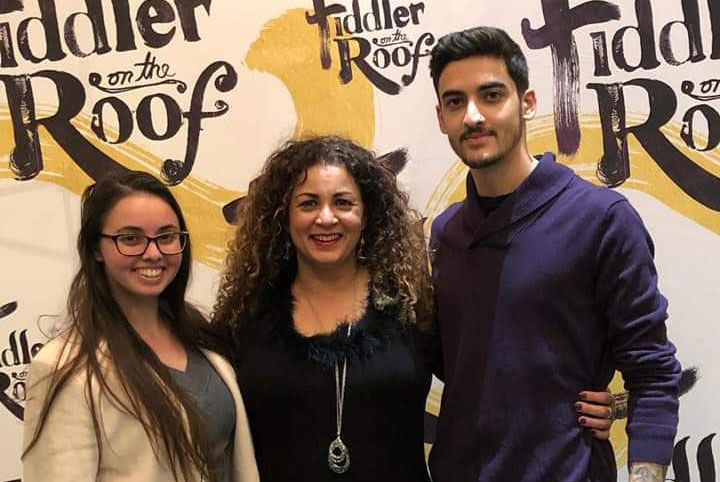 Why I Give: “Cincinnati Is My Home”: Israeli Native Helps Jewish Cincinnati Flourish

“I feel like I’m giving a part of myself by educating students in Cincinnati about our shared heritage,” said Idit Moss.
She is a bundle of happy energy; one can’t be in her presence without having a smile on your face. Even connecting over Zoom for this recent interview, one could feel the energy and passion she has for Cincinnati and the Jewish community.

She moved to Cincinnati for a one-year job as an au pair after she left the Israeli Defense Force. That was nearly 30 years ago. (She jokingly requested that readers please don’t do that math to figure out her age.)

She’s been teaching at Rockwern Academy ever since, and has been an active volunteer in the Jewish community. “I’m teaching the kids about our country. I’m showing them Israel is not just my country, but it’s theirs too. It feels like I bring a little bit of Israel with me to the students.”

Idit said she always wanted to work with children, and that’s why she moved here (for one year) to become an au pair for a Jewish family. “I had a wonderful experience with them,” she recalled with a smile. “During that year I met my future husband at the JCC, and to make a long story short, we got married and had two kids, Karen (now 26) and Daniel (now 22). We did end up getting divorced, however, we remained good friends throughout the years.”

After her year of au pair work ended, Moss was given the opportunity to become a teacher assistant at Rockwern Academy, or Yavneh Day School, as it was called then. “I was so young and wasn’t sure I wanted to become a teacher, but it was a job where I was able to work with children.” It turns out it was a perfect fit, and she has spent her entire career with Rockwern.

“It was thanks to a big push from Esther Fierberg, the principal at the time, that I enrolled at the University of Cincinnati,” Moss said. “I had planned on going to college, but never in the USA. My English was good, but not great, and I was hesitant to take classes. I started with one class, and it was manageable. The next quarter, I took two classes, and so on. It took me a longer time to finish my degree because I was already married and worked full time. It wasn’t a typical college experience.”

Moss has bachelor degrees in Psychology and Elementary Education. She also holds a Master degree in Educational Administration. In addition to her full-time job at Rockwern, she is the Director of Education at Northern Hills Synagogue. “It is my honor and pleasure to be part of the Northern Hills Synagogue and the Rockwern Academy families. In both places, I am able to touch many lives and make a difference.”

In addition to her day jobs, Moss was involved with a number of Jewish organizations in Cincinnati, including at the Mayerson JCC, Camp Livingston, Adath Israel, Wise Temple, Cincinnati Hebrew Day School, and the Jewish Federation of Cincinnati. “Volunteering is a way of life for me and many times I have been approached to lead Israeli dancing in the community,” she said. “My friends and children say that I never stop, I’m always busy doing something. I like to find ways to grow programs or do something new. Whatever I take on, I give one hundred percent. I think I get more personally out of volunteering than the organizations do.”

Moss says that although our Jewish community, compared to other cities, is small, we are strong, inclusive, and people care for each other. The Jewish Federation encourages teens, college students, and young adults to visit Israel by providing generous grants. Both of her children used the Federation grants to participate in the March of the Living trip to Poland and Israel. “It is truly my honor to be part of this wonderful community and help others by volunteering,” she said.

Moss began volunteering when she was a teenager in Israel. She said there was a group home for children near her house, and she would see the children outside playing when she was coming home from school. “One day I decided to go and knock on the door to see if I could help,” she said. “I was about 13, and they let me come in and play with the kids to keep them company. As I got older, I could take them to the park.”

“Then one day a girl came in—she was about three months old—and I fell in love with her,” Moss recalled. “I was allowed to bring her to my house, and we would treat her like one of the family. She was there for about three years. Eventually her mother took her back, but I would still go and visit her as often as I could before I went into the army. This little girl, she’s 40 now, we’re still in touch, even after all of these years.”

Moss said volunteering was never a conscious decision. “It just comes from my heart and from my love to help our Jewish community.” She thought she was going to become a social worker, but “I found out that I had a different mission in life. I have very much enjoyed my job and sharing stories about Israel with the students—no matter if it’s at Rockwern, or any of the other places I taught or volunteer over the years—that part will never go away.”

Moss said being Jewish in Cincinnati takes more effort than being Jewish in Israel. “In Israel, it’s easy to be Jewish,” she said. “Stores close early on Shabbat, you smell the Challahs in the bakeries, you see the soldiers coming home. Being Jewish is in the atmosphere, it’s everywhere around you.” Moss recalls having culture shock when she first arrived in Cincinnati and discovered that Friday was just a regular day. “I’m very proud of our religion, heritage, and culture,” she said. “I feel that it’s our duty to keep Judaism alive by educating the younger generations. We have to teach our children about our values and about our history.”

Moss said on Sukkot she builds a sukkah in her classroom and the material she uses is the material her grandparents used on their sukkah in Israel. “It’s beautifully colored, and it’s all in Hebrew. I show it to my students and tell them stories about my family and about growing up in Israel.” She said she uses that as a way to connect with the students, to show them Judaism doesn’t only exist here in Cincinnati, but is a worldwide community.

“In addition to my two jobs, I’m currently on the committees for Yom Ha’atzmaut and Yom HaZikaron at the JCC,” Moss shared. “I’ve been on that committee for many years and always look forward to this time of the year to start with the planning.”
When asked how she would encourage someone to get involved, Moss said it was as simple as asking to help out. “I know there are some people who would like to volunteer, but maybe they don’t know how to reach out, or who to ask,” she said. “But there is always a need for volunteers in the community. Reach out to the Jewish Federation or any of the synagogues, and they’ll be happy to connect you with something that will fit your passions. There is something for everybody to do in your comfort zone. When you volunteer, you’re part of the community.”

Moss has lived in Cincinnati longer than she lived in Israel, and she says she’s often asked if she identifies as an American or Israeli. Her answer is thoughtful and powerful: “I will always see myself as an Israeli. I visit my family in Israel every year and my accent isn’t going anywhere. But Cincinnati is my home. I love this city, and this community, and the people.”

“Volunteering is a way of life for me and many times I have been approached to lead Israeli dancing in the community. My friends and children say that I never stop, I’m always busy doing something.” —Idit Moss, community volunteer