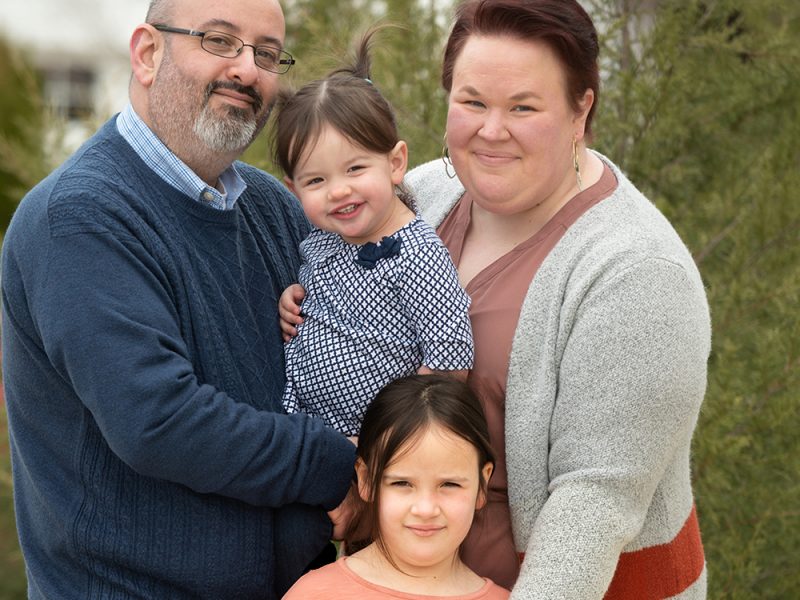 For Stacey and Izar Spivak, giving back to the community became a priority when they started a family of their own.
November 1, 2021 | 0 Comments
Tweet
Share
Share
0 Shares

Why I Give: Stacey and Izar Spivak Are Building the Community They Want

“When I was involved in my youth group, my teachers asked what kind of Jew I wanted to be when I grew up,” remembered Stacey Spivak. “Did I want to be more spiritual? More community-based? I told them I wanted to be exactly like my parents, and be involved in the community, and be on boards—clearly that came true.”

We met up with Stacey and her husband Izar at their home on an incredibly hot day in August. The couple, both working from home, were enjoying the quiet of their house; their daughters, ages 7 and 2, were at school and daycare.

We were there to discuss why the couple gives back to Jewish Cincinnati. As we were settling in, their 65-pound lap dog Finn came to say, “hi,” wagging his baseball bat of a tail and requesting someone scratch his ear. “He’s friendly, but he slobbers,” Izar warned.

Once Finn et al. were settled into their spots, the interview began with some background information. Izar spoke about how his family immigrated to Cincinnati in the late ‘80s from Azerbaijan. He attended Sycamore High School and the University of Cincinnati, and met Stacey through friends. As for Stacey, she was born and raised in Cincinnati and grew up with a family that has played a major role in the Jewish community. Stacey’s parents are Sue and Jay Price, two extremely active and dedicated members of the Cincinnati Jewish community for many years.

As involved as Stacey and her family were in Jewish religious and communal life, Izar was on the opposite end of the spectrum. “Being an ex-Soviet family,” he shared, “we didn’t grow up with religion. The only holiday I can remember from childhood is Passover, and the only thing I knew about it is that you got to eat matzah. That’s it. No historical context, no understanding.”

Izar went on to say that where he grew up if you weren’t of the mainstream practicing religion in the area, then religion didn’t exist. “There was an Orthodox synagogue,” he said. “My father would go from time to time, but again, religion just wasn’t a part of our family experience. Even when we moved to the States, and even though I went to Cincinnati Hebrew Day School for a short period, it still didn’t sink in.”

He said it wasn’t until he met Stacey and started seeing Jay and Sue’s involvement in the community that he saw the benefits of being part of something bigger. As for Stacey, even though she grew up watching her parents take part in creating a better community, it wasn’t until she was an adult with children of her own that the importance of giving back really struck her.

“My parents took us to the Holocaust and Humanity Center’s annual gala in 2016, and Jerry Springer was the keynote speaker,” said Stacey. “I remember sitting there listening to his speech, and I was so moved I actually started crying into my salad. I was thinking that I really need to get involved because I don’t want my kids to have to hear the kinds of stories that Jerry was sharing about his family’s experience during the Holocaust. That was what really motivated me to get involved as an adult.”

Another motivating factor for the couple’s philanthropy was when Jay was diagnosed with terminal cancer. “As he got sick, we started going to a lot of events honoring him, highlighting his volunteer career,” Izar said. “We saw all he had done for others, and it occurred to us that A) we need to do more, and B) there’s this whole Jewish community that we haven’t given an opportunity or haven’t been involved with. Yes, we gave money here and there, but seeing how much the community came together to help support Stacey’s family, it was the motivation we needed.”

The couple is very busy, juggling family life, work life, and volunteer life. Stacey is on the marketing committee for the Nancy & David Wolf Holocaust & Humanity Center, is the President of the Valley Temple Sisterhood, and is on the board for the Women of Reformed Judaism Central District. As for Izar, he sits on the board of the Jewish Cemeteries of Greater Cincinnati, as well as the board of Jewish Family Service. “When my family came here, we had $500 in our pocket and nothing else. Jewish Family Service helped my family, along with many other ex-Soviet families, and now that I’m in a position to help, I felt I had a responsibility to give back to those who helped me.”

When asked how they are able to keep up with all of their obligations, the couple laughed, shared a smile, and admitted that they didn’t know; saying that when things are important, you find the time to do them. “I try to be very transparent with our oldest daughter about what it is that we’re doing,” said Stacey. “I try to explain to her exactly what it is that I’m working on, that we’re planning a bunch of things to help people in our community.”

“A lot of people probably think they can’t give—they don’t have enough to give,” said Izar. “I get it. We’re a young family, time and money are tight, there are a lot of other obligations. But it doesn’t have to be a lot. $10 here. $25 there, or you know what? It doesn’t have to be financial support. You can give your time or your talent—it’s whatever you’re able to give of yourself to help make the community better.” Stacey agreed adding, “And even beyond that, if you don’t have the time or money, just sharing the information with others to help get the word out—raising awareness—that alone is beneficial.”

At this point Finn got up from his dog bed and walked out of the room—for him, the interview was done. We still had one more thing to ask of Stacey and Izar, though. We wanted to know what all of this means for them, why do they do it? The simple answer? The future. “It’s my hope that the Jewish community continues to be welcoming and open,” said Izar. “Our hope is that someday our kids will get involved. We want them to understand why the community is important, why their parents volunteer or give, what help the community gives to everyone around them, and maybe even 20 years down the road, they’d be just like us participating and volunteering and giving.”

“Our hope is that someday our kids will get involved. We want them to understand why the community is important, why their parents volunteer or give, what help the community gives to everyone around them, and maybe even 20 years down the road, they'd be just like us participating and volunteering and giving.” —Izar Spivak