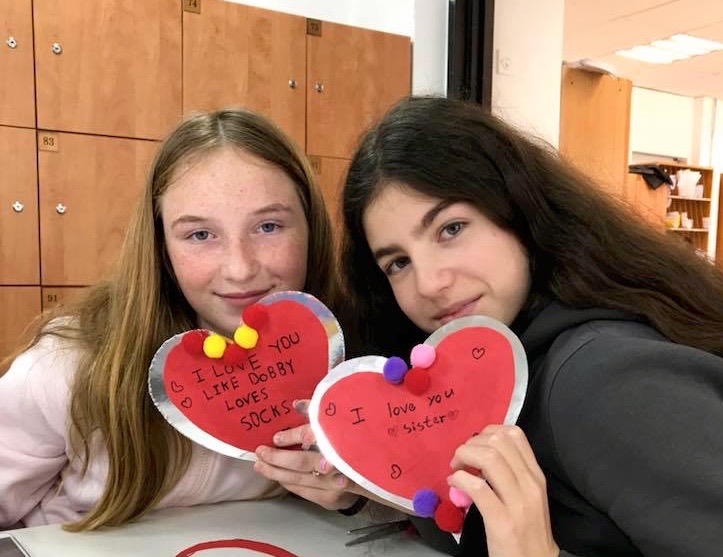 Brianna Pecsok completed the inaugural year of the Cincinnati Fellow in Israel program in July. She taught American Judaism and culture to Israelis living in Netanya, including lessons on US holidays like Valentine’s Day.
August 3, 2018 | 0 Comments
Tweet
Share32
Share
32 Shares

This is Partnership: Cincy Fellow in Israel Reflects on Program’s Inaugural Year—Brianna Pecsok

It’s hard to believe that it’s been almost a year since I took my first step on this journey as the Cincy Fellow in Israel. It’s been a whirlwind of a year filled with exceptional successes as well as challenges.

I’ve been thinking about this question as I reflect on the past year. Through Partnership2Gether (P2G), about 450 Jewish and Israeli communities are connected through 46 city-to-city and region-to-region partnerships, including Cincinnati and Netanya. Each partnership has unique programs and makes people-to-people encounters, creating meaningful relationships and connections.

More and more communities in the United States are inviting ShinShinim (or Chaverim M’Israel as we call them in Cincinnati) to volunteer for a year, as they see great value in building relationships between the United States and Israel and exposing Americans (both Jewish and non-Jewish) to Israeli life and culture.

Measuring the success of those partnerships, however, is difficult. It’s difficult to measure because the results are not quantitative. The results are the quality of the relationships created and the ongoing connections made.

Success begins with a program but is measured with the laughter, the hugs, the tears, and the shared experiences of the people involved. With the car rides, the walks on the beach, the Kiddush (blessing) over the wine before an incredible feast. With the excitement you feel when you see someone you know on the street. With the weddings, b’nai mitzvoth (bar and bat mitzvah), and the funerals. With the people whose homes have become your home. With the discovery that you have so much in common.

And Was I Successful?

Since the Cincy Fellow program was new this year, there were no benchmarks for success. Everything I did was new. I had to embrace feeling comfortable being in a place that wasn’t accustomed to me—or anyone like me.

I was in Israel as part of the Israel Teaching Fellow (ITF) Masa program. I was assigned to teach middle school students, which, in and of itself, was a success. In addition, this teaching assignment gave me the opportunity to talk about Jewish pluralism with my students. And by getting to know the other teachers, I could advocate to do the same in high school classes and larger groups. By the end of the year, I had taught 120 students about the many components of American Jewry.

The program is creating a buzz among other Jewish communities in the United States. Cincinnati was the first to take the success of the ShinShin or Chaverim program and do the reverse—bring American culture to Israel and make so many more connections. Leading the way for other American Jewish communities to create similar programs in their partnership cities in Israel is a huge success.

I gave lessons on Cincinnati wherever I could. As part of the Masa program, I had to facilitate English Day at the school. I set up stations with games teaching English that included Cincinnati symbols, including “Pin the Wings on the Pig,” “It’s Skyline Time,” “Bengals Touchdown,” and “What’s the Scoop?”

Outside of school, I connected with a group of students through the matnas (Israeli JCC) who are going to London this summer. After my first lesson, I asked if I could come back for other meetings just to connect. Later in the year, they invited me to teach again—a wonderful lesson about leadership and gratitude. This strengthened P2G’s connection with the matnas, and recently, the students that are headed to London had a “speed-friending” session with the Onward Israel interns from Cincinnati.

I was part of the selection committee for students who traveled to Cincinnati this summer for camp. Then, I helped prepare them with lessons on Jewish pluralism and Cincinnati culture.

I also had the chance to give a lecture about pluralism to the leadership group at the young adult center called HaGag.

Another wonderful way to create partnerships is through hobbies. In my time in Netanya, I opened an acroyoga class at the matnas and was able to meet and connect with new people in the area.

I’d call all those connections a success.

Reality on the Ground

With those successes came the reality on the ground that not everyone was so receptive to my lessons about Jewish pluralism.

For example, when I was trying to arrange a lesson to the 7th grade about Jewish pluralism, the teacher told me, “I don’t want you to teach to the 7th grade because I don’t want them to tell their parents we’re trying to convert them.” Or when I told a group of 8th graders that I read from the Torah and wore a kippah and tallit on my bat mitzvah, one of the male students snickered at the thought.

It also took much longer to get in front of groups than I expected. What I came to expect about Israeli culture is its spontaneity. For some groups, if I asked to teach, I could schedule a lesson just a day in advance. However, others didn’t want me to be a part of their group regularly or at all. I was satisfied just to be able to lecture once or twice to these groups.

In these moments, I realized that teaching about this subject requires time and patience. This is not the kind of work that will be finished after one lesson—or one year. The subject is sensitive and personal, and there’s much more work to be done before some students will be open to considering a different way to express Judaism than their own.

Although my year as the Cincy Fellow is over, I am excited to pass on the reins to my good friend Shelly Zeiser. I know she is going to continue to push the needle on Jewish pluralism and deepen our relationships with the Netanya community. I look forward to hearing about her successes next summer.

“I had to embrace feeling comfortable being in a place that wasn’t accustomed to me—or anyone like me.”  —Brianna Pecsok