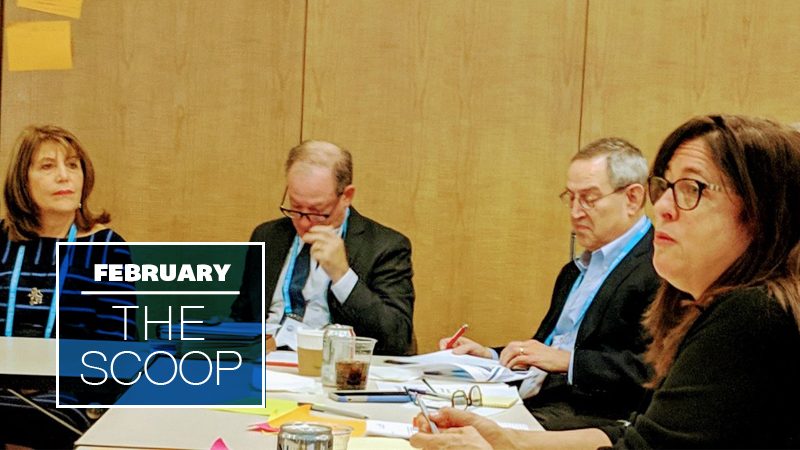 Cincinnati Goes National. I’m proud of the several volunteer leaders in our community who have recently been named to leadership positions in national organizations. Here are a few current national roles:

This transition is part of a community-wide effort to ensure continuity and quality of services for older adults in our community. (I’m proud that our SBS Human Resources team helped seamlessly onboard nearly 50 StarPoint employees within a 30-day deadline.)

Driving Out Darkness. In April, the JCRC will host a summit on antisemitism and hate at Cincinnati Union Terminal. This immersive learning experience is geared towards leaders in Cincinnati’s civic, governmental, religious, and educational sectors. It will feature national speakers as well as our local experts on antisemitism and how antisemitism intersects with other forms of hate. While the summit is primarily focused on our non-Jewish community partners, there is also great value for leaders within our own community. Registration is now open.

We Need to Talk. Our relationship with Israel has become strained by increasingly divergent political views and priorities in both countries. An example is last week’s announcement that Prime Minister Benjamin Netanyahu will allow a party called Otzma Yehudit, whose predecessor was banned under Israeli law because of its openly racist views, into his coalition for the upcoming elections. This has been disheartening to many American Jews, because this party’s views are contrary to Israel’s founding principles and including them in an Israeli government would be a gift to anti-Israel activists. Our JCRC, along with many national organizations including AIPAC, the American Jewish Committee, and the Anti-Defamation League, made a statement condemning this act.

This has made the dialogue between American Jews and Israelis more challenging and more important. This year, our Israel Center, in partnership with the JCRC and Mayerson JCC, wants to bring people with diverse opinions together in the same room to promote learning and robust dialogue about Israel—to increase understanding of the other. This initiative is an opportunity to lean in and have productive conversations about divisive issues.

There are several ways to “talk” this year:

Put a Ring on It! The familiar sounds of Super Sunday… Stop by the J on Sunday, March 10, to participate in the community’s largest annual community phone-a-thon. It’s not too late to sign up to volunteer. Make some calls, grab some coffee and a bagel, and catch up with friends. It’s always a fun day. Thank you to our Super Sunday Cochairs, Andrea & Steve Baron and Sari & Ryan Small.

“I want to keep the Jewish community of Cincinnati strong, and the Federation is a big part of that.” —Andrea Baron, Super Sunday Cochair

“I want to keep the Jewish community of Cincinnati strong, and the Federation is a big part of that.” —Andrea Baron, Super Sunday Cochair