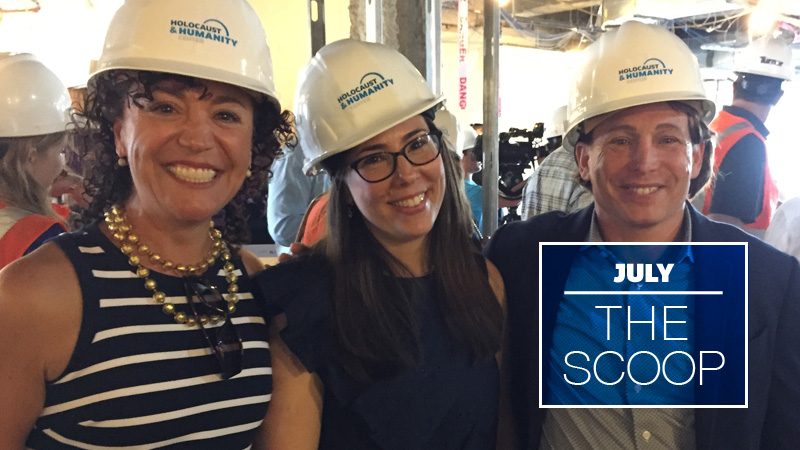 Keeping Our Promises: The Scoop in July

This monthly report from CEO Shep Englander features topics of interest to the Cincinnati Jewish community and the work of the Jewish Federation of Cincinnati.

Keeping Our Promises to Older Adults. The sale of Cedar Village understandably raised many questions. Progress has been faster than I expected.

Just in the past month:

I am so impressed at the progress that has been made in such a short time.

Unique in the World. I was honored to be at last week’s groundbreaking for our new Holocaust & Humanity Center​ (HHC) Museum, being built at the Cincinnati Museum Center​. HHC’s new multi-media learning experience on ethics, character, and courage will make it unique in the world. Congratulations to Sarah Weiss​, Kathleen Brinkman,​ and the HHC Board. I’m proud that HHC chose the Federation’s FRD team, led by Danielle V. Minson​, to run its capital campaign—which has raised over $13 million! Thanks to the generous donors and especially to Nancy and David Wolf, who provided an inspiring naming gift for the new museum. (This video is of me with a sledge hammer. Fun!)

Impactful and Personal. A few weeks ago, the JCRC showcased the critical work the organization is doing at its 79th Annual Meeting, which was compelling, moving, and personal. JCRC President Walter Spiegel and Director Jackie Congedo spoke powerfully about the JCRC’s mission, their leadership in forming the Cincinnati Regional Coalition Against Hate, and their involvement in sending legislators on their first trips to Israel. Their keynote speaker was Christian Picciolini, a former violent extremist, who now helps people leave hate movements like the one he helped create.

At the meeting, Walter spoke about how the JCRC identified immigration reform as a priority issue a year ago. They engaged in advocacy and community education about the DREAM Act, held a community-wide forum on immigration policy, and joined more than 350 other organizations in a statement condemning family separation. And now, rooted in Jewish values, they are helping interested community members to support children who’ve been separated from their parents under new federal immigration procedures. These families need our help with basic necessities and with legal assistance to navigate the system. Click here to support immigrant children and end family separation.

Building Resumes, and Having a Little Fun. Our office is bustling again this summer with four smart, energetic Workum interns. We are pleased to welcome Julia Mattis (Marketing), Bailey Ogan (Community Building), Rachel Rothstein (CYJL, YAD) and Ben Ruskin (JCRC). They are among the 13 college students getting experience at Jewish nonprofits this summer through the Workum program. Read about each of them here.

Also, our Onward Israel interns are Getting Into the Swing of Things in Tel Aviv. Already, they have participated in the Pride parade (one of the largest in the world), hit the beach, and successfully navigated the bus system to get to their first days on the job.

These programs, in addition to Careers Cincinnati, make up Cincy Internships, the community initiative to help build students’ resumes, provide professional experience, and teach job search skills as they prepare to enter the workforce. We’re proud to be part of that effort.

Selfless Generosity. In June, the Greater Cincinnati Planned Giving Council honored Bill Freedman with its Voices of Giving Award. The award pays tribute to selfless generosity in making a bequest or planned gift to a favorite charitable organization. Bill was one of 33 philanthropists recognized this year. This is a well-deserved honor. Bill has been a passionate, effective, and humble leader of our community for decades.

What You Expect When You Give. When you give to the Federation, you want to know where your money is going and that it’s being used wisely. I’m proud to announce that for the eighth consecutive year, the Federation has earned a 4-star rating—the highest possible—from Charity Navigator, the country’s largest independent charity evaluator. We earned this exceptional rating because of our commitment to transparency and our financial strength as an organization.

HHC's new multi-media learning experience on ethics, character, and courage will make it unique in the world. — Shep Englander