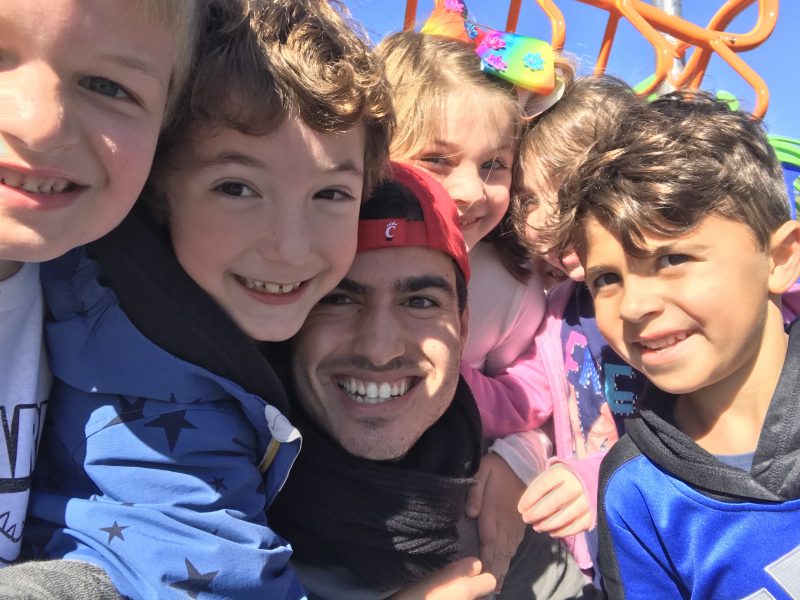 Asaf Munk, an 18-year-old Israeli who worked in Cincinnati for a year as a Friend from Israel/Chaver d’Israel, found an incredible network of connections here.
January 6, 2020 | 0 Comments
Tweet
Share151
Share
151 Shares

Back in March, this post about local security inaugurated a deeply troubling theme for the whole of 2019: antisemitism and security concerns inside the US. In the article, volunteer and professional leaders from Ohio’s Jewish Federations, including Cincinnati, took to Capitol Hill to advocate for increased security funding for faith-based and cause-based nonprofits at high risk of terror attack.

This January post by Asaf Munk, one of 2019’s 18-year-old Friends from Israel / Chaverim m’Israel, who visit Cincinnati in pairs from Netanya, our partner city for one year, comes in at number 2.  His Cincinnati family said: “No, Asaf. You are not our guest. You are our brother.” He felt the same.

Over 193 Facebook shares for our #3 post: Four pairs of grandparents and grandchildren traveled to Israel as the culmination of a brand new, year-long program called G2: Global Intergenerational Initiative, which aims to strengthen Jewish identity in fun and meaningful ways among young in Cincinnati and other cities across the world.

Number 4:  Driving Out Darkness Summit on Antisemitism: A Resounding Success

In the wake of Charlottesville, our JCRC made a cutting-edge decision to host—without precedent—a one-day summit on antisemitism and hate, called Driving Out Darkness—and it, and this article about it, was amazingly successful, unfortunately demonstrating again the concern about antisemitism in our community and in the culture. It drew more than 300 leaders from across our city’s civic, governmental, religious, and educational sectors. Every room was at capacity, and Jewish leaders came with hopes of replicating a summit back home.

Number 5:  The Importance of Giving: One Donor’s Story

Coming in at number 6 is an interview with Bobby Fisher on giving. “I think it’s simple. We are expected to give back, according to our teachings. You don’t have to look too far to see people who need help. So I think that there’s a responsibility to be involved in giving,” he says. Together with his wife Arna, Fisher led the capital campaign for the relocation of the Nancy & David Wolf Holocaust & Humanity Center to Union Terminal.

Our seventh most popular story is about Batya Selevan, a woman who kept fighting for a whole year till she—with JVS Career Services’ help—found a job she loves. “Do not give up!” she says. “You gotta keep smiling, you gotta keep plugging away at getting a job. Do not give up whatever you do. ’Cause I got frustrated, but I kept going and I got a job.”

Number 7:  Jewish Cincinnati Only as Good as Strength of its Leaders

This article on how the Federation is supporting and retaining the community’s high-achieving professionals received 116 Facebook shares. The Monaco Jewish Nonprofit Leadership Institute, a learning- and network-building professionalization program, is now in its fifth year.“Our community is only as good as the strength of its leaders,” said Jewish Federation of Cincinnati CEO Shep Englander. “So we are working hard—across organizations—to create opportunities for our employees to develop professionally.”

With 91 Facebook shares, this post chronicled the dramatic escalation in the possibilities for local Jewish young adults thanks to Cincy Vine, a networking and collaborative website for Jewish young adults coordinated by the Federation. “Cincinnati Vine really gave us a place to go and see everything that’s going on,” said Natalie Adler. “And to be honest, I want to do everything!”

Only posted November 22, Leah’s story nevertheless made it as number 9 for 2019.  In her “love letter” to Jewish Family Service’s Barbash Family Vital Support Center, Leah starts off homeless and “in terrible shape financially, physically, and emotionally.” It took four difficult years, but she is now back. ““It was this place that gave me my heart back, and my sense of community, and an idea that I might in fact make my way back. Which I have,” she says.

In March, this post about another Friend from Israel (Chavera) struck a chord with our readers, with 224 shares on Facebook. Chavera Adi Itscovich tells the story of her time here so far: “I did not anticipate the ripple effect my arrival in Cincinnati would create in the community. I am continually astonished how impactful the Chaverim M’Israel are. In the midst of all those simple, sincere conversations [with students], they learn about Israel and being an Israeli—in a much more authentic way than traditional instruction.”

Popularity assessed via page views on this blog, which doesn’t correlate perfectly with Facebook shares.

Security, antisemitism, and connecting with Israel rank among the top topics in Federation’s articles posted on the Federation blog and Facebook in 2019.